A year of hope 2021 holds out hope for when Corona is a beer again, Donald is just a duck, tiers are on a cake and bubbles are only in champagne. Overall, we remain optimistic on the economic outlook for 2021. Coupled with robust policy support (fiscal and monetary), equity markets should provide further upside as revenues and profits recover. With such an outlook we remain overweight equities and underweight government bonds.

Reflection and the folly of forecasts

Before we move to look forward a brief reflection on 2020 may aid in providing context for the 2021 outlook. Unlike many past economic crises, the 2020 crisis started and remains one primarily of health. The COVID-19 pandemic rapidly impacted the economy through lockdowns that were implemented across the globe. An unprecedented destruction of demand took place, but supply chains have also been fractured (try getting a new bike). The economic outlook for the coming year is dependent on a wide variety of factors including: infection rates, further lockdowns, the roll out of the vaccine, and fiscal and monetary policies. Hence, making predictions about the next 12 months is likely to be more challenging than normal. There is a tradition at this time of year of investment houses providing investment and economic forecasts. It may provide entertainment or a pretense of being able to forecast the future. As the late great J.K. Galbraith said, “There are two kinds of forecasters: those who don’t know, and those who don’t know they don’t know.”

The chart below shows the track record of economists’ predictions for the U.S. 10-year Treasury Yield, since 1999. The actual survey goes back to 1968 and captures the expectations of economists for different variables for the forthcoming years. Overtime, (even prior to 1999) economists have consistently predicted that bond yields would rise in subsequent years. The folly of forecasting in one chart as over the same period bond yields have trended lower.… 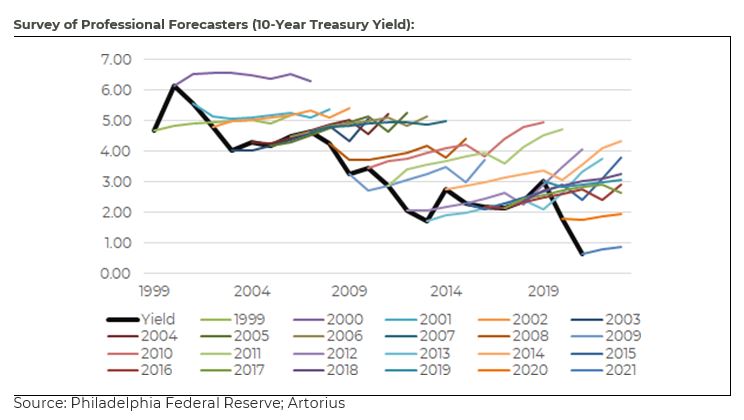 Using scenarios instead of forecasts

That is not to say that investors shouldn’t hold expectations about the next few months or years, but rather to acknowledge the unknowable and unforecastable future. In contrast with having a single expectation, many investors generate a range of outcomes (scenarios) to understand the potential path for economies and markets. Using scenarios, with levels of expectations expressed as percentages, means that the narrative no longer hinges on whether a particular outcome is right or wrong. In addition, using scenarios means that investors can often incorporate and adjust expectations to new information.

Outlook An economy’s ability to manage the spread of the virus is critical to its economic recovery in the absence of a vaccine. East Asia has managed the virus well as a result of targeted lockdowns and social cohesion. Much of the rest of the world, on the other hand, has struggled to contain the pandemic.

Base case: Robust eventual recovery (60% probability) Continued economic recovery, albeit held back in first six months in Europe and the U.S. as the greater economic freedoms envisaged in a vaccinated future will take time to be introduced. Recovering economies spur greater consumer spending revenue and profits growth. The pandemic has disproportionately impacted the services industry versus the manufacturing industry due to social distancing measures and changes in behavior. As vaccines are distributed, consumer spending on services could be expected to recover more quickly than manufacturing.

From an investor perspective this outcome may favour those parts of the market that fared poorly through 2020. However, these companies, such as the cruise and airlines, took on significant debt to tie themselves over 2020, so any revenue recovery may not flow through to the equity owners. We expect the Emerging Market economies of Asia to continue to grow more quickly than elsewhere, but the surprise package maybe Latin America which was badly hit through their winter – however, if vaccines arrive in time then this region may perform well.

Major Central Banks around the world have provided even greater monetary policy support, undertaking a range of policies to support economies including a massive expansion of their balance sheets through large scale asset purchases. We expect Central Banks to remain supportive and in turn keep interest rates low. Record high equity prices and strong house price inflation confirm that Central Bank liquidity is aiding asset prices. In our base case, equities in general would perform solidly, albeit struggling to make strong headway due to the apparent valuation challenges. A risk of an equity bubble as risk appetite increases.

Upside Case: V for vaccine (25% probability) A quicker than expected benefit from vaccine rollout, enabling European and U.S. economies to open more quickly than expected, with more normalised levels of activity by March. This may come about if evidence emerges that a single dose provides high levels of immunity to serious illness, ahead of the second dose. Falling hospitalisations will enable politicians to lift restrictions earlier than expected.

Equities could be expected to deliver strong returns (>10%) with out of favour regions and sectors (travel etc) performing well. In such a buoyant environment, politicians may seize the opportunity to bring increased taxation and regulation. This may dampen investor appetite especially in those sectors facing potential greater scrutiny such as the monopolistic technology companies. Investors may see heightened merger and acquisition activity by companies with access to low cost capital on the back of Central Bank liquidity.

Downside Case: V for vaccine (15% probability) Although this scenario only has limited likelihood, what happens if the vaccines aren’t as effective preventing the spread, or if vaccine distribution is poorly executed? Countries may have to maintain prolonged travel bans, and economic and social freedoms remain curtailed. One may expect equities and the economy in general to struggle, but in turn equity market weakness could be expected to trigger further Central bank largesse. Expectations of a more normal economic outcome would be reversed with higher quality bonds being the beneficiaries of a return of risk aversion.

This may prompt policymakers to further shift economic support to explicit ‘People’s QE’ or Modern Monetary Theory, to ensure social cohesion. In extremis, Central Banks holding their own government’s debt may acknowledge the unlikelihood of this debt being paid off, and effectively cancel the debt owed to the Central Bank by the Government. Probably as unthinkable as the coming of the Gold-standard in the 1930s or Bretton-Woods in the 1970s.

Policy matters The policy response so far, though large, has been designed to fill a hole, not stimulate growth; to avoid deflation, not generate inflation. The measures were intended to soften some of the blow caused by the private sector’s forced shutdown. Central Banks’ asset purchases have been more effective at driving up asset prices than convincing households or firms to spend, albeit low interest rates have enabled low cost borrowing to be undertaken. Looking ahead, will the global cycle simply return to pre-COVID behaviours — with low growth, high debt, modest productivity and low inflation — or take a fundamentally different path? Fiscal conservative orthodoxy to seek to ‘balance the books’ and reduce the size government — This would be like Japan in the 1990s or Europe post the Great Financial Crises of 2008-09. Bond yields would remain close to zero, with inflation expectations stuck well below target. The outlook for equities would depend again on the willingness of central banks to keep expanding their balance sheets. Sectors that would structurally do well would be those with structural pricing power that can also avoid regulatory pressure.

Socialist expansionist orthodoxy to redistribute – Higher taxes and even higher spending, with an effort to narrow income inequalities. Some on the political left may favour such an outcome but the result may be an environment of stagflation, similar to the late 1960s to 1970s. Unless the market was convinced that Central Banks would keep interest rates low there may be much higher bond yields and declines in equities as profitability would be curtailed through both higher wages and higher taxation.

Use of fiscal policy to promote a large investment surge — From 1945 to 1965, fiscal expansion allowed technologies developed during the Second World War to be rolled out as economies were rebuilt. New green infrastructure and a shift from measuring economic wealth to economic health could be the path to a golden age. In that case, the market would project stronger growth, productivity and returns, as well as a higher equilibrium interest rate. As a result, bond yields could rise for an extended period to reflect higher real growth potential. Whilst stronger economic growth should flow through to improved levels of company profitability and activity, valuations of equities may well fall as yields rise.

Cyclical economies: cyclical asset returns As the economic cycle evolves, then so does the pattern of returns of different asset classes. Defensive assets, such as government bonds and Investment Grade bonds perform well through recessions. In the recovery and expansion phase, where we think the global economy is currently, higher risk assets perform well. A surprise of 2020 was that the performance of the U.S. equity market, or more specifically, the defensive digital giants, performed so well, whereas the rest of the equity market, both in the U.S. and the rest of the world behaved in a recessionary manner. 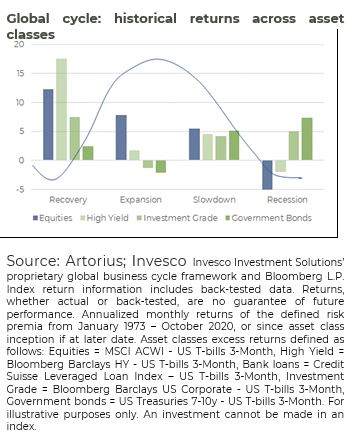 Charts that matter From the perspective of the investment outlook, investment returns are set by a mix fundamentals, policy and sentiment. The policy background appears highly supportive. Central Banks adding liquidity (effectively financing government deficits via money creation) since March 2020 (and at least for the past decade) has driven equity markets higher, and bond yields lower. 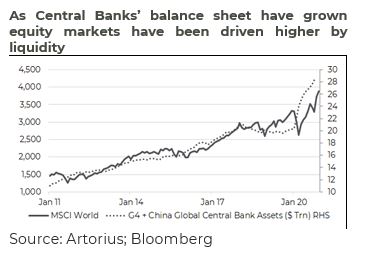 The linkages between Central Bank liquidity and equity returns is even more stark when viewed via the prism of year of year returns.

In the meantime, thankfully, the outlook for profits also continue to improve. From the lows in June, expectations for profits have continue to climb. This is not just a U.S. phenomenon as other regions are witnessing a better than expected earnings outlook. 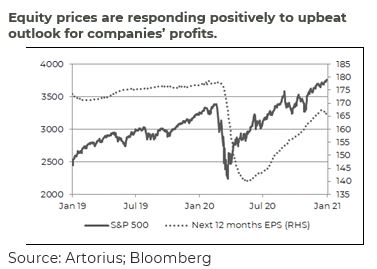 A challenge for equity investors is valuation. Valuations, especially in the U.S. equity market, remain elevated. However, so do bond valuations so relative valuations still favour equities over bonds for long-term investors. In addition, a consequence of the strong recovery in profits is that the valuation backdrop has improved (or at least not getting any worse) as earnings have risen by more than equity prices. 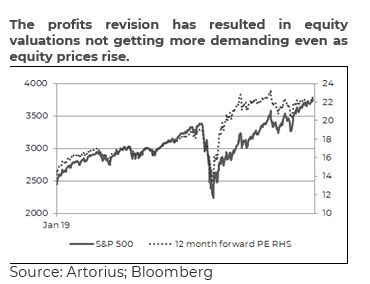 A key determinant for profits over the next few years will be driven by profit margins. In recessions profit margins fall. But as businesses restructure and revenues recover this has typically resulted in recovery of profit margins. The profit margin recovery is often under appreciated by analysts and investors resulting in the earnings upgrade cycle which typically supports the equity market recovery. 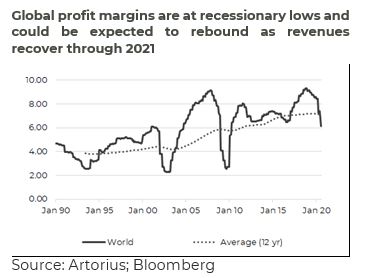 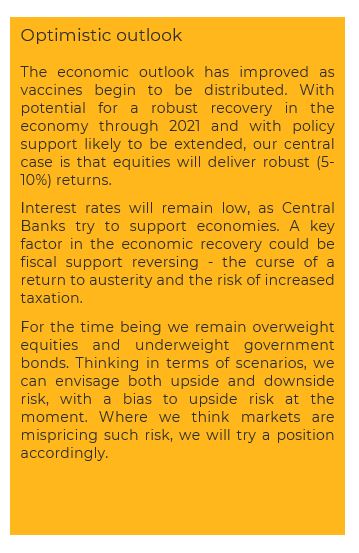 Artorius provides this document in good faith and for information purposes only. All expressions of opinion reflect the judgment of Artorius at 1st January 2021 and are subject to change, without notice. Information has been obtained from sources considered reliable, but we do not guarantee that the foregoing report is accurate or complete; we do not accept any liability for any errors or omissions, nor for any actions taken based on its content.

The value of an investment and the income from it could go down as well as up. The return at the end of the investment period is not guaranteed and you may get back less than you originally invested. Past performance is not a reliable indicator of future results.