Disconnect Equity markets have rallied significantly from the lows seen in March, whilst in the real-world, economies are playing catch up as they begin to reassemble following the easing of lockdown restrictions. With economic newsflow improving, albeit coming from a virtual standstill, any progress is a move in the right direction. Levels of unemployment are likely to remain elevated over coming months, however, with the political costs of Covid-19 likely to show themselves most clearly in the U.S. election in November. 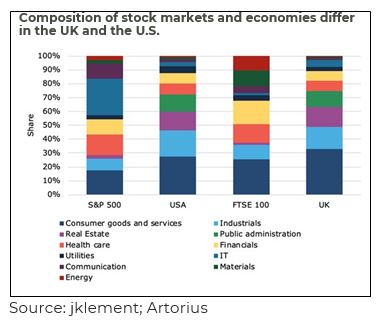 On the other end of the spectrum is the property market. Real estate activities make up c.14% of GDP but property stocks account for only 1% to 3% of the stock market. Industrials and consumer goods and services are also significantly underrepresented in the stock market. In fact, the chart above shows that the GDP of the United States and the UK look remarkably similar. But neither the U.S. or U.K. equity market look like their respective economy.

U.S. elections Given the ‘distraction’ of Covid-19, the US presidential election has yet to dominate market commentary. We expect it to move closer to the forefront of investors’ minds as the vote approaches.

Risk assets rallied post President Donald Trump’s surprise victory in 2016 as investors priced in a combination of lower taxes, looser regulation, and higher fiscal spending. Four months ago, despite trailing in the polls, it was President Trump’s election to lose, with a strong economy and a 50-year low in the unemployment rate. However, Trump’s approval rating is now near the lowest that it’s been during his presidency.

Momentum is now clearly with the presumptive Democratic candidate, Joe Biden. Donald Trump’s handling of the pandemic and protests after the death of George Floyd have eroded the Republican President’s approval rating. Biden has always held a lead in national polls, but that advantage in poll averages has jumped from 4% in May to 10% now. 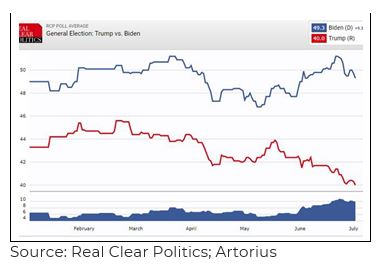 Trump’s approval is slipping fastest in the counties where the number of cases have been more than 28 Covid-19 deaths per 100,000 people, according to Pew Research Center. Pew surveyed voters in late March and in late June and found 17% of those who had approved of the President now disapprove.

As cases climb in Republican leaning states, the headwinds for a Trump reelection appear to be growing. Arguably even more worrying from Trump’s perspective are polls in swing states also shifting significantly towards Biden, and losses of support among both older voters and even his most reliable base of ‘white, no college’ voters. The latter group are likely to be younger and lower income and as such most likely to be hardest hit by the economic fallout from COVID-19.

Popular vote v Electoral college As memories stir of 2000 and 2016 when Al Gore and Hilary Clinton won the popular vote but failed to take the presidency, we remind ourselves that it is the U.S. electoral college that decides the election. The President must secure the 270 votes in the college. There's an elector for every member of the House of Representatives (435) and Senate (100), plus an additional three for people who live in the District of Columbia.

Each state gets at least 3 electors. California, the most populous state, has 53 congressmen and two senators, so they get 55 electoral votes. Six states -- Alaska, Delaware, Montana, North Dakota, Vermont and Wyoming -- are so small, population-wise, that they only have one congressperson apiece, and the lowest possible three electoral votes.

The chart below shows those so-called swing states, where the election is likely to be decided. Biden leads across the swing states making a change in the White House more likely. 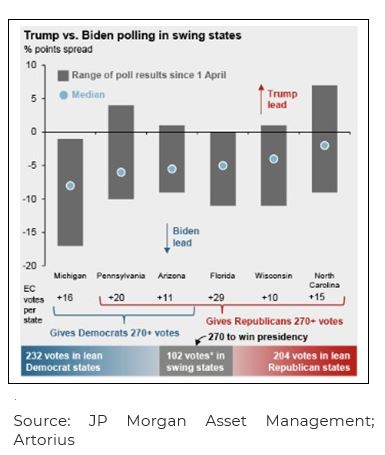 Market reaction may depend on Congress We do not expect a big equity market reaction if the government remains divided, with one party in the White House and the other controlling at least one chamber of Congress. If Trump wins and the Democrats hold the House of Representatives, it would be roughly the status quo; under a President Biden and Republican Senate combination, the latter chamber would likely prevent many of the most market-moving policies in either direction.

Yet a Biden presidency could still bring a few market-related policy changes, especially with regards to foreign policy. America’s China policy could become less volatile in style but would largely remain unchanged in substance. Biden would be more likely to seek a multilateral approach to China, which in turn should make an all-out trade war with the EU less likely.

Regulation of technology giants may continue to tighten gradually but this has not been a policy area about which Biden has shown particular passion, unlike some others in the Democrat party. Generally, expect the policy direction to be more social, greener and more redistributive.

A blue wave in which the Democrats win not just the White House but also gain control of both Houses of Congress would increase the risk of a more activist agenda. One on hand this may dampen investor sentiment as taxes could be expected to increase, but if further fiscal action promoted growth and trade relations improve then investors may be willing to forgive bigger government.

A better Europe? A different Germany? After much dithering, the European Commission proposed a €750 billion fund (or more than 6% of EU GDP) to bolster the recovery in the hardest-hit regions. The proposal, backed by the considerable clout of France and Germany, marks a pronounced change in attitude for Germany, which so far had been reluctant to use its savings for the benefit of the wider EU.

This joint response comes on top of the significant stimulus that national governments already injected into their economies early in the crisis and the substantial monetary stimulus of the ECB.

The proposal is a step towards risk sharing and a deeper fiscal union as the European Commission aims to issue bonds at the pan- European level. These would be repaid over the long term by revenues generated from new taxes and levies targeting carbon emissions, single-use plastics, and digital firms.

The event which has most surprised financial markets is Germany’s volte-face on its austere fiscal stance. In June, the German government announced a second stimulus package worth close to 4% of GDP. This comes after a first package of a similar amount was announced in March. Germany’s steadfastness at maintaining fiscal austerity has long been considered by some as being a cause of Europe’s meagre economic growth, especially since the Global Financial Crisis.

The new attitude from Germany towards fiscal action provides support for the European economy as it recovers from the lockdowns. With increased risk in the U.S., both from further outbreaks of the virus and political risk, Europe may be seen alongside Asia as a region of economic stability in coming months. 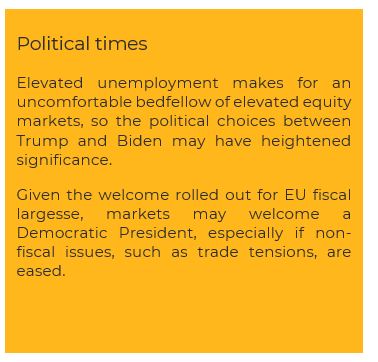