Disconnect With equity markets continuing to rally, investors are either delighted to be making money or baffled as to why markets are going up as recession news flow increases. Markets have rallied in the face of rising unemployment, riots and uncertain progress in the U.K. and U.S. in controlling the virus.

Floating along The rising tide is lifting all boats. On a sea of central bank liquidity, equity markets and risk assets have rallied. Central Bank balance sheets have risen from $20tn at the turn of the year to $25tn as at the end of May 2020. The Fed’s balance sheet has expanded more in the space of less than two months – from $4.29tn to $6.42tn – than in the four years following the 2008 financial crisis.

In response, like Pavlovian dogs, risk assets have rallied in the face of reduced profitability and continued uncertainty. 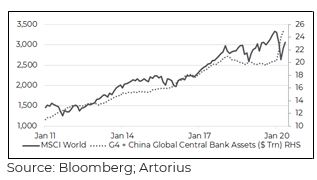 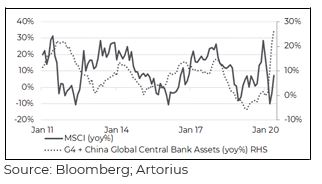 The 25% increase in the Central Bank balance sheet, which started back in October 2019 as the Federal Reserve responded to weaker economic activity, has resulted in a seemingly wider disconnect between Wall Street and Main Street.

Harsh reality The expected initial rebound in economic activity will mostly reflect workers returning to their jobs. We expect the US unemployment rate to peak in June and then fall over time as economies recover. Unemployment is likely to fall but will remain higher than pre-Covid19 levels due to three very different and highly uncertain factors: damaged businesses, weak sales expectations, and new ways of working.

US mortgage applications surged higher in recent weeks. We are surprised at the resilience of this indicator and the speed of recovery, but it is a welcome sign of normalisation in the U.S. economy. 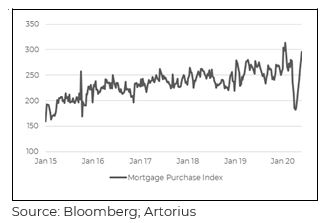 And there is a rebound happening elsewhere. For example, German car production rose 1,400% in May after the 97% fall in April. That leaves the May output some 65% lower than the February level. The confusion of big numbers will result in potentially misleading commentary in coming months.

Earnings update: flooring it? Analyst estimates for company profits have been cut by 20% in the U.S. and 27% in Europe since the peak of the earnings series at the end of January. The good news is that the pace of cuts is easing, whilst on 12-month forward basis earnings expectations are starting to stabilize and climb. The extent to which companies have withdrawn from giving guidance may mean that analysts are reluctant to take the scalpel to their estimates.

Estimates for company profitability have been cut by 20%, and expectations appear to have troughed 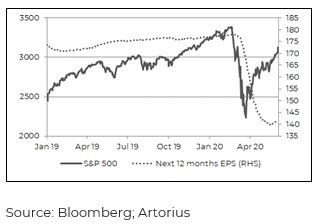 A better fiscal rule: ability to pay? Whether in the U.S. or elsewhere, economists and investors are wondering about the fiscal future. Around the world, traditional fiscal rules have been put aside as emergency funding of economies has resulted in ever larger public spending measures.

Historically, in the age of high interest rates and/or inflation, high public deficits and debt were frowned upon. The economic, political and social consequences of each of debt defaults and high inflation are severe. As such, there has been a powerful imperative towards limiting or reducing debt on the part of governments seeking to maximise long-term fiscal flexibility.

A key aim of fiscal rules is “sustainability”: to ensure public finances are managed to avoid the risk of default or inflation. Rather than look at the size of the debt, we would agree with those that look at the costs of servicing the debt as a measure of sustainability.

Over the past 40 years, public debt as a percentage of the respective economies has risen across the developed world.

Public debt as percentage of the economy 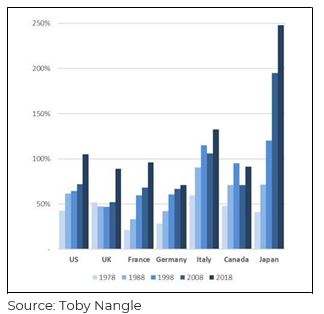 servicing that increased fiscal indebtedness has fallen. The reason for this is the long-term decline of interest rates.

Public servicing costs as percentage of the economy 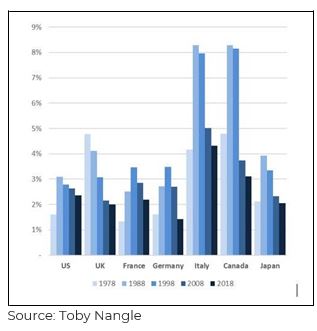 As Japan continues to show, with the presence of persistently low interest rates and risk of deflation, fiscal expansion resulting in higher public debt doesn’t necessarily result in higher costs. In the UK, government debt has doubled and costs have halved since 1980.

We think debt interest cost as a percentage of GDP (Gross Domestic Product) is a better metric than debt stock as a guide to a country’s capacity to sustainably meet its financial obligations. When it is low it would suggest there is room for fiscal expansion.

When debt service costs are very high, governments tend to be forced to take action. Instances where interest costs have reached 5% of GDP have tended to be met by alarm in Finance Ministries, and fiscal adjustment policies have tended to follow. Examples of this include Canada’s 1985 and 1995 Plans, Italy’s 1988 and 1995 Plans, and the 1976 IMF programme in the UK.

Given that debt servicing costs are so low, governments are expanding fiscal support without the concern that the costs of doing so will bring an unaffordable burden.

Fiscal rules that focus on the size of debt, will introduce painful austerity which is only required when the costs of debt are too high, say 5% of GDP.

From protection of incomes to stimulating recovery The reason that this is getting so many pixels is that countries will be forced to support their economies for many months to come. This fiscal support may result in further Central Bank balance sheet expansion, which we believe is a key driver for equity market returns.

As the pandemic lockdowns ease, governments will be faced with the need to shift the emphasis of fiscal policy from job and income protections schemes to demand generation.

Germany’s coalition government overcame ideological difference, recently passing a €130bn stimulus for the foundering German economy. The German plan includes cuts to VAT for the remainder of 2020, vouchers, and families will receive €300 per child. These are likely to encourage immediate pickup in spending, which in turn will aid the economy in the short run. Support for infrastructure to help the transition to a ‘green economy’ may improve long-term economic growth, but the nearer term problems of creating demand need to be addressed as the economy reopens 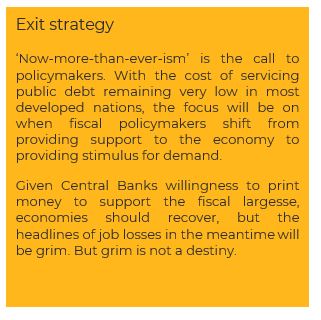