Beyond the bounce With the US equity market having the strongest month since 1987, it maybe that the equity trough has passed for this cycle. Maybe. The rate of infections and mortality have improved, leading to an easing of restrictions in Europe and hope of such in the UK and the U.S. The economic impact of the lockdown will be evidenced in the economic data and companies’ earnings reports for months to come.

A risk-off rally From the February highs the S&P 500 is down ‘only’ 16% as of the start of May. Having sold-off 33% in late March, the strength of the 27% rally since then has left many investors wondering if the rally has gone too far too quickly.

We have sympathy with the notion that on the face of it, equities in the U.S. have got ahead of economic reality. However, we would label the market having had a “risk off rally” as quality and growth areas have led the market higher.

According to research from Goldman Sachs the median stock remains down 28% which would feel more attune to the economic impact of COVID-19. Most stocks and sectors remain significantly lower than previous highs. This is also in evidence in non-US equities that the typical or median stock has not recovered as much of the March falls as headlines from the U.S. equity market would suggest.

Earnings update Estimates for profits have been cut by 20% in the U.S. and 24% in Europe since the peak of the earnings series of the end of January. Compared to the 40% cut in profits expectations through 2008-09 we would anticipate that further reductions are likely in coming months.

The good news is that the pace of cuts is easing. The extent to which companies have withdrawn from giving guidance may mean that analysts are reluctant to take the scalpel to their estimates. Nevertheless, the reduction of company earnings is continuing a pace and is likely to do so until company management can provide guidance of a recovery, which is likely to be a few months off yet.

Estimates for company profitability have been cut by 20%, and although the pace of cuts has eased further reductions are likely 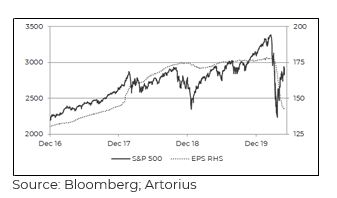 Given the stimulus, discussed below, that has been thrown at the economy, economists expect an economic recovery through the latter part of 2021. As such analysts rationally expect that company profitability will recover. 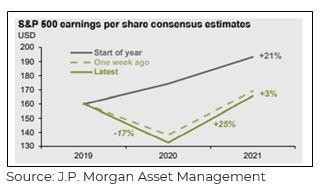 It may be the case that with a suppressed labour market, wage inflation that was starting to erode company profit margins will ease. This may enable company profitability to grow more than expected in coming years beyond 2020. That would be a first - class problem to have and is unlikely to be an issue for the next few months.

Stimulus junkies Whether in the U.S. or elsewhere, investors have been given reason to look through the economic damage caused by the lockdowns by the amount of support by governments and Central Banks. The pace and quantum of the stimulus is astonishing, and we suspect that there will be more to come.

According to KKR, stimulus amounts to 18% of global GDP with more to come 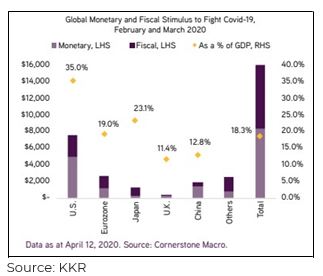 According to estimates from KKR, stimulus has amounted to somewhere between 11% and 35% of GDP, depending on the country. Already, China is at nearly 13% of GDP, Spain is heading towards 20%, and the trillions of dollars in the U.S. amount to 35% of GDP.

Economists’ forecasts for a rebound in the second half of 2020 is based in part on the expected gradual easing of the pandemic and reopening of the economy, but perhaps more importantly on the unprecedented speed and size of policymakers’ economic response.

Too much economics? Whilst ‘valuable’ economic activity has stalled (and will hopefully return as lockdowns are eased) the policy action has prompted an excess supply of economic commentary. This is particularly true of discussion of Modern Monetary Theory, MMT.

If the U.S. government spends $100 into the economy and taxes $90 out of the economy, then the residual $10 represents a federal budget deficit for the fiscal period. While that may sound like bad news, MMT’s supporters are quick to point out a silver lining: There’s now an additional $10 in the economy that wasn’t there before, with the potential to boost aggregate demand. That’s the basic idea behind the U.S. government’s plan to send $1,200 checks to millions of U.S. households in Coronavirus Tax Relief.

Deficits are good in periods of economic crises as government spending, funded by borrowing, results in additional spending in the ‘real’ economy.

MMT’s true roots lie in the ambition to limit unemployment. So, in the current climate, government spending and deficits protect the economy from the effects of recessions. With creativity and policy leadership, deficit spending on long-run productivity enhancers, such as education, infrastructure, and research and development—may help raise potential GDP over time, making the economy more resilient in the future.

Deficits can indeed be too big. Evidence of a deficit that’s grown too big is inflation, which is the only relevant constraint on government spending, according to the MMT argument. When aggregate demand outstrips what real resources—including commodities, factories, and workers—in the economy can produce, then the government should curb deficit spending and entertain other aggregate demand offsets, such as higher taxes.

Rather than being an anathema for investors, deficit support for the economy may actually be a boon to investors. MMT’s holy grail— helping limit unemployment throughout the business cycle—would be bullish for most financial asset classes. Lower unemployment should result in more elevated company sales as household incomes would be higher than otherwise the case. Time will tell if the expansion of deficits will have its desired effect.

We don't know the extent and depth of the recession we’re in. It's one thing to forecast a 10% fall in GDP but when you start seeing higher unemployment and a collapse in retail sales, when many company heads say they see worse times ahead, one should expect asset price volatility.

However, as the quantum and timescale of the pandemic become clearer, investors should begin to once again reflect longer term economic fundamentals and the process of solid and sustainable recovery will begin with greater confidence. This is predicated on COVID-19 being more manageable if it re- emerges. 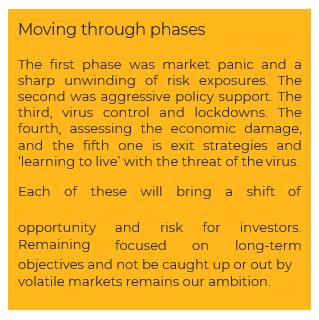 Artorius provides this document in good faith and for information purposes only. All expressions of opinion reflect the judgment of Artorius at 1st May 2020 and are subject to change, without notice. Information has been obtained from sources considered reliable, but we do not guarantee that the foregoing report is accurate or complete; we do not accept any liability for any errors or omissions, nor for any actions taken based on its content.