While the return of Covid-19 across Europe will slow the pace of the recovery, and indeed potentially return the continent back into recessions, the U.S. election at the beginning of the month could be a dominant factor over the coming months and years.

For any non-U.S. investor seeking to gain insights into the potential impact of the U.S. election on portfolios, we would highlight two important points • The nature of U.S. politics in limiting the power of a President • The disconnect between political manifestos and actual reality is as true in the U.S. as it is in the UK.

The President proposes a Budget request to both Houses of Congress. The House of Representatives and the Senate need to approve the budget resolution. When the President’s party is in control of both Houses then the Budget proposal from the President can be agreed upon relatively quickly. Otherwise the President is faced by the opposing party, and the plans from a President can often be a challenge to be enacted.

There is a sense that the Democrats may win the White House but also both the Houses of Congress. This may increase the likelihood of a larger fiscal package in January 2021. Moody’s Analytics and Oxford Economics have assessed the potential economic packages of a Biden led administration. Both groups’ research point to a better economic outcome under a ‘Blue-wave’ outcome.

Moody’s anticipate only modest differences in enacted policy and the economic outlook with a split Congress, regardless of who is President, but the differences seem likely to be meaningful if Trump or Biden win the presidency with Congress under their party’s control. 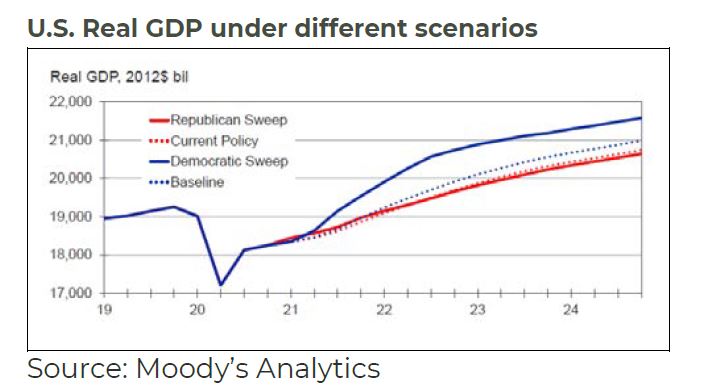 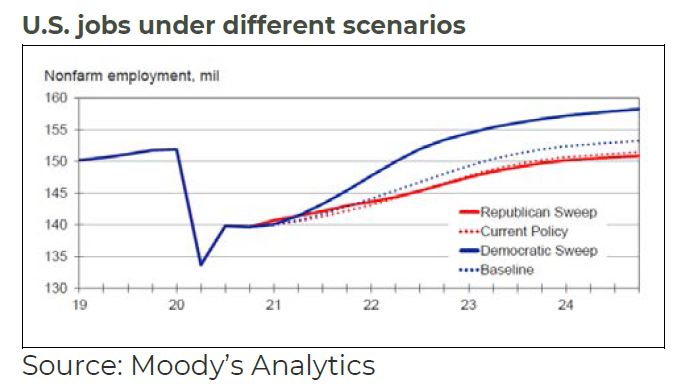 Policy promises in elections are often not delivered but because of Biden’s substantially more expansive fiscal policies, the economy could be expected to recover more quickly coming out of the pandemic than under Trump. Moody’s anticipate a recovery to full employment in the second half of 2022 under Biden compared with the first half of 2024 under Trump.

Biden’s reversal of Trump’s policies on foreign trade and immigration would also contribute to stronger economic growth, so that by the end of their terms in 2024, real GDP would be $960 billion, or 4.5%, larger under Biden than Trump according to Moody’s. Biden’s focus on educational attainment, clean energy and other infrastructure, elder care, and paid family leave is expected to have a significant impact on the economy’s long-run growth potential. 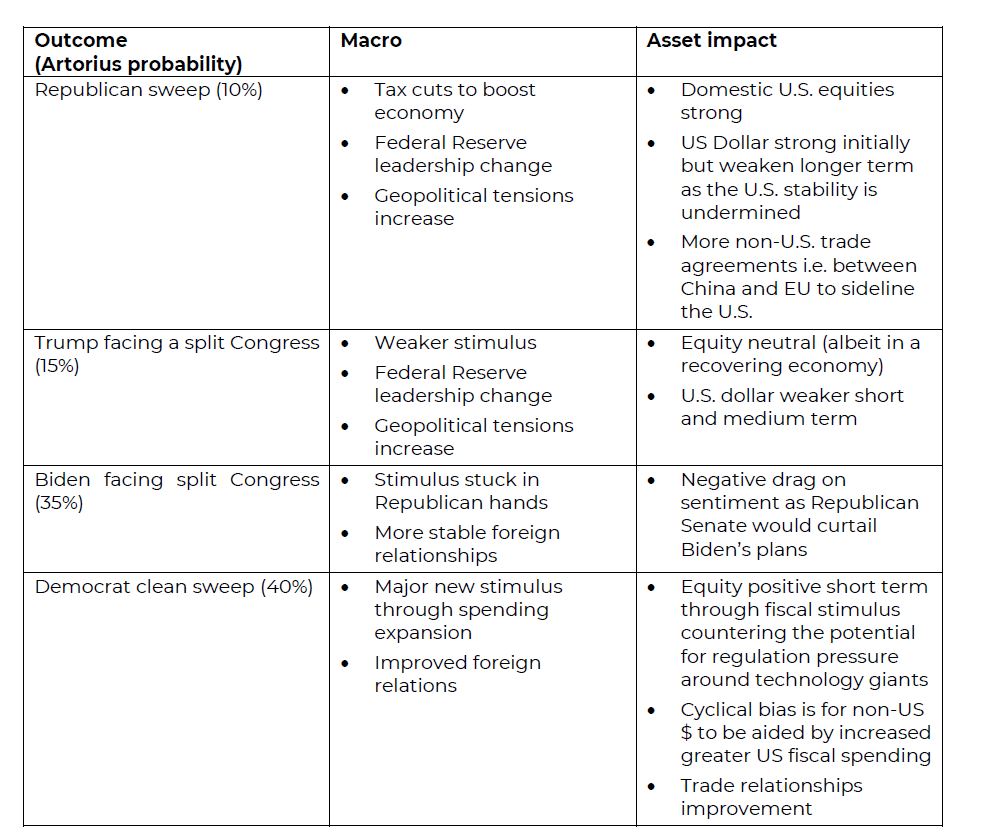 Deficits are expected to grow under both Presidents as spending grows more quickly than tax revenues, with a $1 trillion forecasted under Trump and $2.6 trillion under Biden. In ‘normal’ times bond yields could be expected to climb but we would expect the Federal Reserve to act to limit the rise in bond yields, especially after the comments of Federal Reserve Chair, Jerome Powell, calling for more fiscal stimulus

The Federal Reserve printing money, via Quantitative Easing, to cap bond yields has historically benefited risk assets. The resultant increase in deficits and monetary support may weaken the U.S. Dollar, but it would depend on the monetary policies elsewhere. 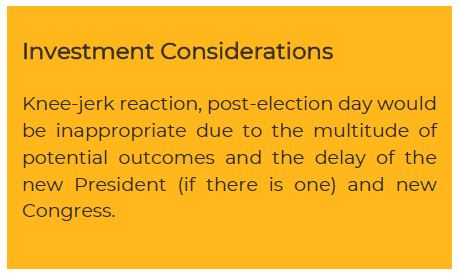