Sanguine and support The over-bought nature of the summer speculative froth which pushed some parts of the market to new highs appears to be unwinding. As we return to the fundamentals, the backdrop of improving profitability and supportive Central Banks has to be seen against the risk of second-wave infections and possible political uncertainty, with the latter potentially coming in the form of Brexit and Trump, but also the risk that authorities prematurely tighten fiscal policy. Given how recent the concerns have been over a ‘depression-like’ recession, we are struck by the volume of research and commentary fretting about the potential for inflation. Whilst much of the writing on inflation focuses on the ‘macro’ models of monetary largesse causing prices to rise, it is worth bearing in mind the ‘micro’ drivers of inflation which are the supply and demand of individual products or services.

Short term inflation impact of COVID-19 The Federal Reserve Bank of San Francisco, FRBSF, has examined the impact on U.S. inflation of COVID-19. The research placed each of the categories of spending that make up the inflation basket into one of two groups: COVID-sensitive or COVID-insensitive. Sensitive categories are those that experienced a quantity or price change—either positive or negative—between February and April 2020 that is statistically significantly different from its average change over the preceding 10 years. Sensitive categories make up approximately two-thirds of expenditures in the core PCE (Personal Consumption Expenditure) index and include air fares, hotels, restaurant services, and physician services. The insensitive group includes those categories with only negligible changes in price and quantity.

Several forces could have caused the strong decline in COVID-sensitive inflation. In the analysis, the FRBSF suggests that the disruptions associated with COVID-19 likely resulted in shifts in both the supply and demand of goods and services. Consumers pulled back demand for many products, notably restaurants, air travel, and hotels. Simultaneously, many employees remain unable to go safely back into the workplace, which places constraints on the amount of goods and services that can be produced. 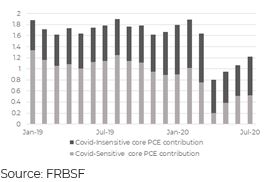 Shifts in demand should move both prices and quantities in the same direction, while shifts in supply should move them in opposite directions. Some of the largest categories within the demand-sensitive group are air travel and hotels, which saw prices and demand fall. Supply-sensitive categories are those for which prices and quantities moved in opposite directions, both at a statistically significant level. These appear to have had limited effect over the past six months.

Using this framework it is possible to suggest that the current low core inflation rate is largely attributable to large declines in consumer demand for goods and services stemming from COVID-19, which have more than offset any upward inflation pressures that have been caused by supply constraints in some sectors. For longer term analysis of this type, the Shapiro paper on the FRBSF website is highly recommended. In summary, rather than rely on an economic catch all model (such as the Phillips Curve or money supply analysis) to explain inflation, instead, by examining the drivers of inflation at a sectoral level it is possible to divide inflation into cyclical and acyclical factors. The latter have limited relationship to the economic cycle, for example, phone or health care pricing. In the U.S. the latter is influenced in large part by government set pricing. 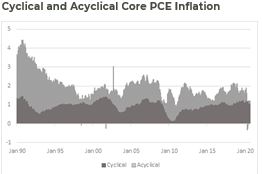 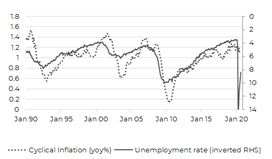 Without cyclical inflation rising sharply, and a trigger for this may be deglobalization especially if Trump heightens trade tensions, then inflation is likely to remain lower for longer.

But what about all the money?

There are some that are expecting inflation to surge following the torrent of liquidity from Central Banks. Whilst Central Bank QE has resulted in massive growth in money supply, this has not fed through to economic inflation over the past 12 years.

Money supply has grown without resulting in higher inflation

The reason for the growing disconnect between money supply and inflation has been the decline in the velocity of money (V) - the speed at which capital turns over in the economy. Since 2010 the V has steadily declined until dropping off a cliff in 2020. 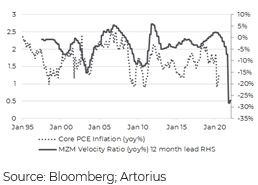 If historical relationships hold true, then inflation could remain low. Whilst bank reserves were boosted, lending didn’t take off and there was no uptick in the velocity of money. Velocity is one such metric one can use to follow the general trend in inflation and, by extension, equilibrium interest rates. The global economy isn't generating much inflation due to high debt loads weighing down spending.

A prolonged example of this has been Japan. Despite massive Central Bank balance sheet expansion (money supply growth) since 1998, bank lending remains subdued, velocity has declined and inflation remains elusive.

Investment implications of low inflation amidst more money supply Central bank balance sheet expansion, via QE, has been a key driver to markets over the past decade. Whilst not impacting main street inflation, money supply has nevertheless resulted in asset price inflation. Gold prices also appear to be linked to Central Bank balance sheet.

If Central Banks continue to deploy QE in isolation, without fiscal policy expansion to plug the economic chasm then it is very possible that low inflation will remain in situ and valuations of assets continue to climb. Earnings update

The good news is that on a 12-month forward basis, expectations for company earnings are starting to climb. For the U.S., earnings for the next 12 months are ‘only’ 13% lower than they were at the start of the year. This recovery is commonplace across regions, although with quite significant industry skews as the likes of the banking sector lag significantly in expected outcomes. ** Estimates for company profitability appear to have troughed and are now supportive** 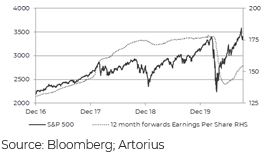 As analysts and investors turn their attention to 2021 so profit recovery will become more important. One of the flip sides of companies cutting costs is the improvement in profitability, and if revenues grow as economies recover then overall corporate profits could reach record highs. 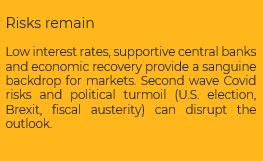